PICO2000 is a cheap DVR card that works well with ZoneMinder.

The name "PICO2000," though often used, is technically not correct. PICO2000 is the name of proprietary software that was bundled with this class of cards.

PICO2000 is available under many different brand names such as Star Imavision Video Capture, Brooktree 848, Brooktree 878. They are generally stated as PICO2000 compatible.

PICO2000 is a quad camera input PCI card. The card uses a single Conexant 878A chip. In addition, some models have 1 audio input jack; it has not been tested with ZoneMinder.

For the United States, ebay may be the best place to purchase a PICO2000. As of January of 2010, they are $30 each (including shipping from China). An ebay search for "PICO CCTV" will return results.

Linux kernels after 2.6.2x appear to have the driver for this card bundled in. Further info can be found at http://linux.bytesex.org/v4l2/bttv.html.

Also, if during bootup your system hangs for 5 minutes or more at "Setting clock (utc)":

The order of the lines is important.

On an AMD 6-core running zm 1.25 on Centos 6 I got this error a couple times a second in /var/log/messages -- kernel: bttv0: PLL can sleep. The remedy was to remove the options from a file in modprobe.d and put it in /etc/rc.d/rc.local as

The following settings depend on your camera. Check your camera's specification sheet (try the suggested starting values in brackets):

When you have multiple cameras sharing one Pico card, you may have issues where:

The reported solution for these problems has varied. You may want to try each of the following options one at a time. Remember to restart ZoneMinder after each change.

This is working for me. Might not work for others. This card is very 50/50 when getting it to work. Each system is different!

In the ZoneMinder Console, Add/edit a camera to this.

X = what input you are using. I have a image on the bottom of this page showing what inputs are what. (NTSC should be 640x480)

Video capture software supporting Bt878A that is not designed for CCTV will likely only allow you to access one camera port at a time. 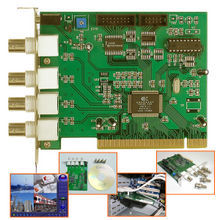 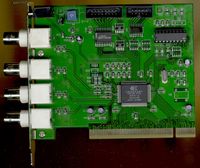